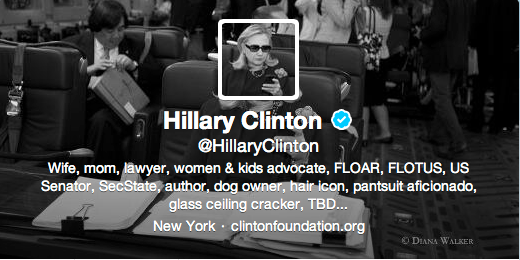 Former Secretary of State and potential 2016 presidential contender Hillary Clinton has joined the social networking site, Twitter. The move has been seen by many as a way to stay in the political mix and be current as much of politics is being done online. According to her profile bio, Hillary is a “Wife, mom, lawyer, women & kids advocate, FLOAR, FLOTUS, US Senator, SecState, author, dog owner, hair icon, pantsuit aficionado, glass ceiling cracker, TBD… .” It is the TBD that is raising the most questions. Some see this as a subtle hint that she will run for office. The pantsuit aficionado was referenced awhile ago when Hillary said that she pitched a tv show called, “Project Pantsuit.” But, back in 2008, Clinton’s presidential campaign was criticized for doing little online, especially in contrast to the then-Senator Barack Obama’s campaign. Clinton’s first, and so far only, tweet referenced an Internet meme from last year called Texts from Hillary. The images showed Hillary in conversation with other people, often acting sassy. The site eventually stopped producing more, claiming they could not top a submission by the Secretary, herself. With Hillary onboard, all three Clintons are now on Twitter. Hillary is now using that photo of her using her phone as her profile picture. President Clinton joined awhile back, he was originally @PrezBillyJeff. That handle was set-up by Stephen Colbert during an interview. President Clinton later changed the handle to @BillClinton.